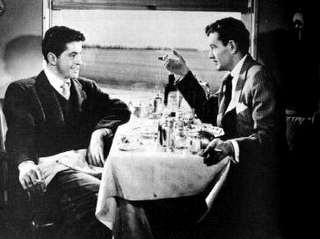 I was StumblingUpon last night and I was set forth on this site. Pretty much a white page with words on it, but it has a story to tell. Usually, I don't read long paragraphs from StumpleUpon. I am merely interested with photography, games, foods, facts, facts, facts and yes, fat cats. The story is an excerpt from his well, I really don't know if this is from his book or what. Haven't done any research about it. But after reading the paragraph, I just said to myself, "Sana meron din magkukuwento tungkol sa naging karanasan niya kasama ako..an interesting story to tell."

COOKIES by Douglas Adams
This actually did happen to a real person, and the real person was me. I had gone to catch a train. This was April 1976, in Cambridge, U.K. I was a bit early for the train. I'd gotten the time of the train wrong.

I went to get myself a newspaper to do the crossword, and a cup of coffee and a packet of cookies. I went and sat at a table.

I want you to picture the scene. It's very important that you get this very clear in your mind.
Here's the table, newspaper, cup of coffee, packet of cookies. There's a guy sitting opposite me, perfectly ordinary-looking guy wearing a business suit, carrying a briefcase.

It didn't look like he was going to do anything weird. What he did was this: he suddenly leaned across, picked up the packet of cookies, tore it open, took one out, and ate it.

Now this, I have to say, is the sort of thing the British are very bad at dealing with. There's nothing in our background, upbringing, or education that teaches you how to deal with someone who in broad daylight has just stolen your cookies.

You know what would happen if this had been South Central Los Angeles. There would have very quickly been gunfire, helicopters coming in, CNN, you know. . . But in the end, I did what any red-blooded Englishman would do: I ignored it. And I stared at the newspaper, took a sip of coffee, tried to do a clue in the newspaper, couldn't do anything, and thought, what am I going to do?

In the end I thought, nothing for it, I'll just have to go for it, and I tried very hard not to notice the fact that the packet was already mysteriously opened. I took out a cookie for myself. I thought, that settled him. But it hadn't because a moment or two later he did it again. He took another cookie.

Having not mentioned it the first time, it was somehow even harder to raise the subject the second time around. "Excuse me, I couldn't help but notice . . ." I mean, it doesn't really work.
We went through the whole packet like this. When I say the whole packet, I mean there were only about eight cookies, but it felt like a lifetime. He took one, I took one, he took one, I took one. Finally, when we got to the end, he stood up and walked away.

Well, we exchanged meaningful looks, then he walked away, and I breathed a sigh of relief and sat back. A moment or two later the train was coming in, so I tossed back the rest of my coffee, stood up, picked up the newspaper, and underneath the newspaper were my cookies.

The thing I like particularly about this story is the sensation that somewhere in England there has been wandering around for the last quarter-century a perfectly ordinary guy who's had the same exact story, only he doesn't have the punch line.
Posted by Jo Arce at 1:11 AM
Email ThisBlogThis!Share to TwitterShare to FacebookShare to Pinterest

I appreciate all your comments!

Jo Arce
The mighty journeys of a wallflower through life, food, travels, and more! candlelight_fgb@yahoo.com

Promote Your Page Too

This work is licensed under a Creative Commons Attribution-NonCommercial 3.0 Philippines License.